Dressing to suit your own personal fable 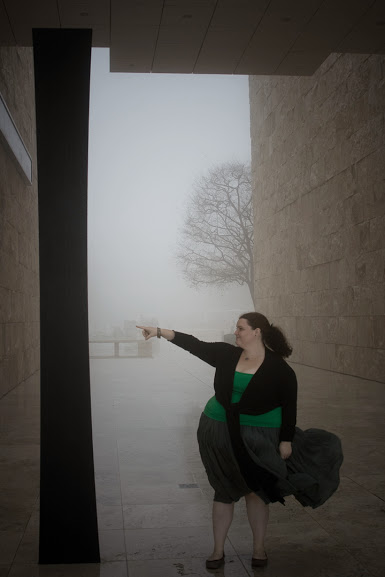 Photo by Devin Cooper, 2008 at the Getty Museum

You wore your hair in braids last night and now it’s doing that rippling thing that helps it to catch the sun. Leave it down. You have that loose dress that you never wear, but today’s the day. With the blue swing coat and that blue seaglass pendant. There’s that part of the movie when nobody knows she’s a mermaid but the hints are all there. Before the spell is broken, run your errands to the pharmacy and the bank. Beneath your sandals, all is sand and wonder.

The opaque orange tights don’t have to look vintage, you know. And you don’t have to pair them with something somber in order to get away with them. Yes, I know how old you are. Forget it. Get that red dress out of the back of the closet. Yes, the one that’s kind of mod. And the yellow jacket. Gold jewelry and pale gold eye shadow. It’s about time you allowed yourself to be the girl on fire. Yes, it’s very subtle. Yes, you can dye your hair. Fire doesn’t have to answer to anyone.

Those purple pants have been toned down for office wear far too often. Strip the blazer off and put on that ivory tunic that skims your hips. Yes, and the pearls. Sweep your hair up and lift your chin a little. Remember that one time that guy called you ‘regal,’ remember how it felt. Queendoms are often invisible. Little signs. Your jade bracelet and that antique signet ring that you bought even though nobody could make out the seal. It doesn’t matter now; it’s your seal. Press it into anything soft. Leave your mark.

‘Mannish’ is a word people use because they’ve never learned to tell a woman she’s commanding or intimidating. You loved that outfit; wear it again. The olive-green military surplus slacks from some cold country; the thick unbustable material that makes you feel pressed and rigid and perfect. That narrow tank top and your BSG dogtags that identify you as Kara Thrace, call sign Starbuck. No one will see them under the flak jacket; those are for you. Don’t let meekness put you in sneakers. Go out and find those boots. They exist just as you imagine they did; black and slightly less than shiny. Heavy. This isn’t cosplay. This is aspecting. Something in you speaks and says I WANT. Strut around like the killer that you are.

There’s that long skirt in the black and red stripes you’re worried will make you look like an exterminator’s tent. It won’t. Put it on under that long sleeved black top. The wind is already picking up at the changing of the seasons and it’ll lift your hair and make it look like you’re being carried down the street. This is the outfit you’re wearing when you pass that mother and her child. The child looks over her shoulder and says mommy look a witch. And the mother looks too, saying no sweetie there is no such thing as witches. But you let her see just a slice of your face through the blowing of your hair, let her see the wind drag you by your skirt again and you know she’s not sure of that. She’s not sure of that at all.

3 Responses to Dressing to suit your own personal fable